Let me preface this post with two things: 1) I have never used a Blendtec, so I can not compare to that, and 2) Vitamix in no way,shape, or form sponsored this post.
For Christmas every year I have to wrack my brain trying to think of things that I really, really want. Its usually hard for me because normally if there’s something I am dying to have, I make a way to get it on my own {aka- not given to me as a gift}. So this past Christmas rolled around and about all I could think to ask for was this awesome Kitchenaid icecream attachment. I love that thing! For the rest of gifts I just got money, which is perfect because I could buy stuff I wanted later down the road..which lead to the Vitamix.
I had been using The Magic Bullet for about a year and it was sucking… big time. My smoothies were so chunky that it almost began grossing me out. Granted I put a bunch of stuff in my smoothies, but it was still gross. I knew I wanted to bite the bullet {no pun intended} and get a nice blender. I did some research (like reading this magic bullet vs ninja comparison) and considered a ninja blender, but couldn’t help but favour a Vitamix. My in-laws have a Vitamix and have had it for almost 15 years. That’s just nuts considering I typically would blow through a different blender each year! They have replaced some parts on it, but most have been covered by their warranty. Talk about a great investment!
I waited patiently until the Vitamix roadshow was in town at our local Costco. I bought the model they always sell on the roadshows, the Vitamix 5200. They sell it for $395, when it normally retails for $449. Here are the specs on the 5200 from the site:
The container is 64 ounces which I love. I can make 3-4 full glasses of smoothies at one time, a huge batch of soup or sorbet, etc. I also know I am going to love this machine even more once I start making homemade baby food!!
So far I mainly use it for my smoothies/juices. Here is a little example of what my average smoothies look like: 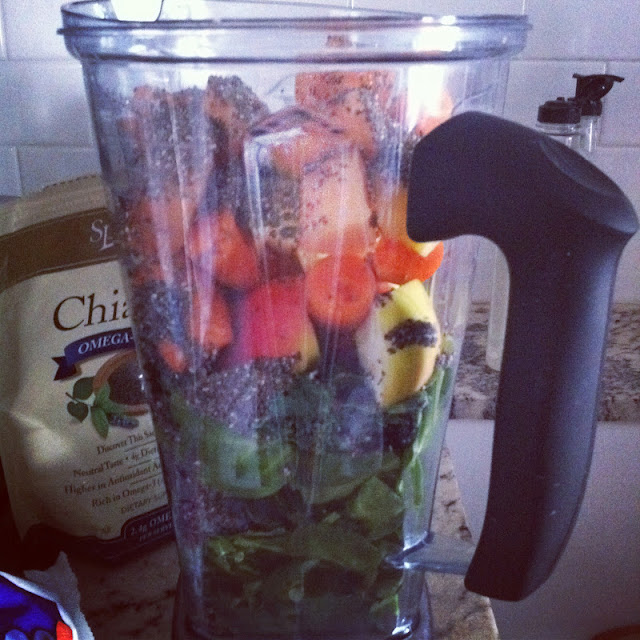 I put all sorts of stuff in them. Spinach, kale, carrots, beets, cucumber, celery, avocado, apples, citrus, pineapple, berries, bananas, chia seeds, flax seed, kefir, greek yogurt, etc. Now some smoothies taste better than others, but they all come out incredibly smooth which makes them great! I still get shocked every time when I just throw all the big chunks of stuff in and it comes out creamy and smooth!
The recipe book that comes with the machine is great too because it tells you in a ‘dummy’ version exactly what ingredients to put in first-last so that your end result is the best it can be. Now, some people have asked me how this one compares to the other models, and the only thing I can really say is that I know this one is a much better deal than the one that Costco sells on a day to day basis. It is only about $20 more but 2x a better machine. Also, if you are thinking about getting it at Bed Bath and Beyond because you can use the 20% off coupon, think again..they don’t accept it for Vitamix’s.
Overall, I am SOO happy I splurged and got this one. I know it will be around forever {it automatically comes with a 7 year warranty-that you can extend later if you want} and is going to become even more useful with having kid{s}! If you are contemplating it, GO FOR IT! And thank me later when you make the best smoothie, soup, or nut butter you have ever had:)