Do you all remember the last time J attempted a plumbing project? Haha, it wasn’t exactly pretty;)

In fact, it was a little bit of a nightmare! I think we did more harm than good in that instance. On this occasion, we definitely had to get a professional in to fix the mess we had made. If you too have found yourself in this situation and if you are seeking an expert team to replace or repair any plumbing and heating issues in your home, then reach out to www.primesplumberschichester.co.uk. It’s sometimes better to just get the job done properly instead of making a huge mess, like us. 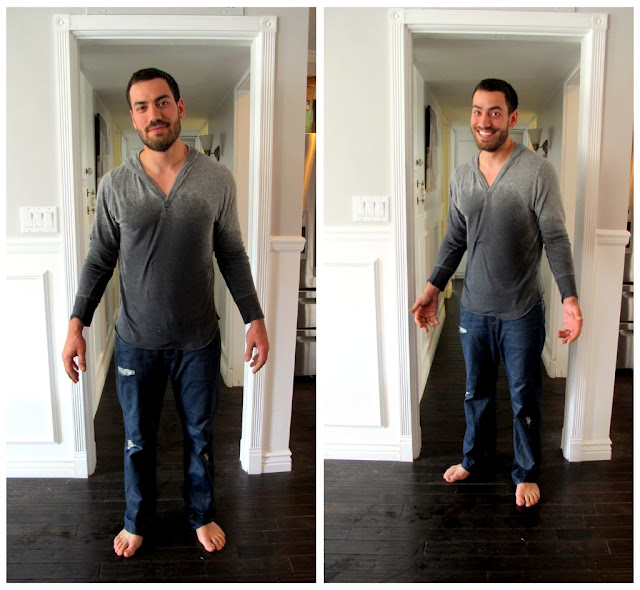 Luckily this time went a little better! We had a super leaky shower-head, and J really wanted to see if he could tackle it himself. Between him remembering how the repair man fixed it last time, and him going on Youtube finding some helpful videos..HE DID IT!! And he did it without drenching himself or the bathroom! Success! To be fair, he did have an attempt previously and failed, so let’s just say the first time was just practice for this time round! After the first time though, it was quite funny. We did mention this story to a number of our friends, who thought it was hilarious. But they were helpful in the sense of advising us to look into something like SD Pipelining if this was to ever happen again. We’ve definitely got this saved for future reference. But I can safely say, we managed to accomplish it this time!
When a shower head is leaking it is not the actual shower head but the pressure balance cartridge that regulates the water. So J set out to replace it. Now normally, you’d recruit a leading plumber servicing the Ringwood area for blocked drains, backflow testing and more for the this kind of work, but he was so insistent on doing it right himself. First turned off the water to the house and drained the pipes by running the faucet and shower. This is the step he forgot last time 🙂
Next, he removed the shower handle (tiny screw underneath) and circular base that hides the pressure balance. Lets ignore the hideous ring of crap from where it was: Next he removed the four screws that holds the balance in place. 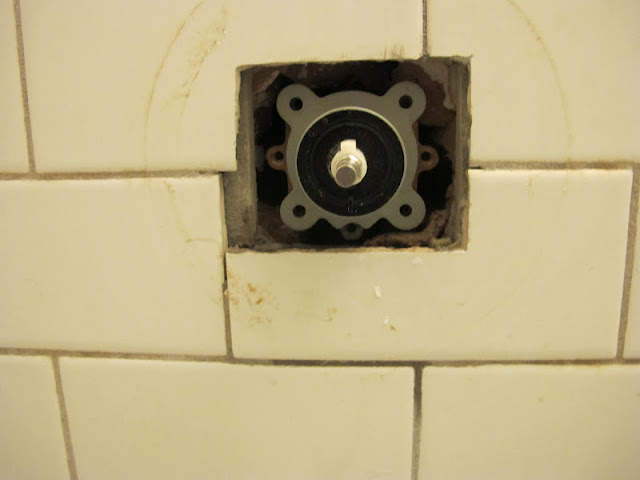 He unscrewed it and popped it out: 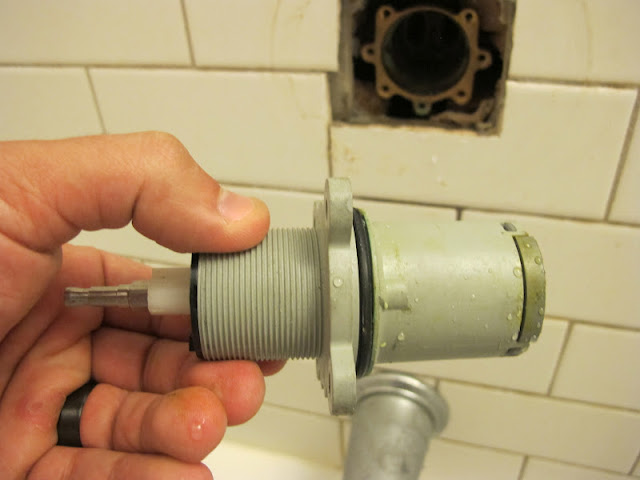 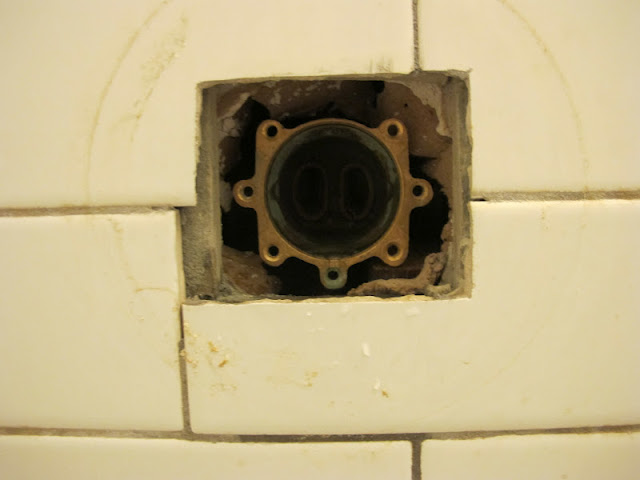 Next it was off to ACE to get the correct part. Each shower is different and takes the specific brand, so he made sure he knew which brand we had (Price Pfister) prior to heading to the store. If you are not sure, you can always just bring your part to the store and they will tell you what you need. The part itself was around $45, not cheap but definitely cheaper than calling a plumber or using our home warranty, which has a $75 deductible. 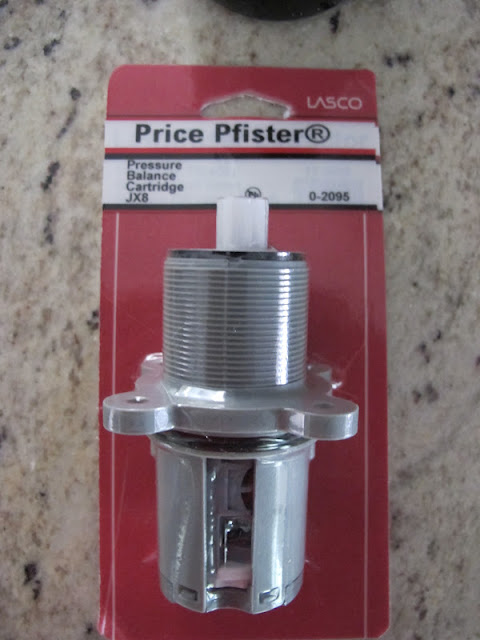 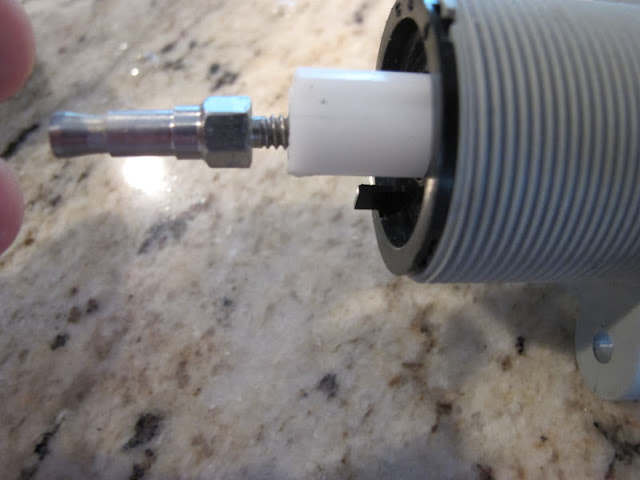 Then inserted the pressure cartridge in the shower and secured and tightened it in place using the screws he removed earlier. 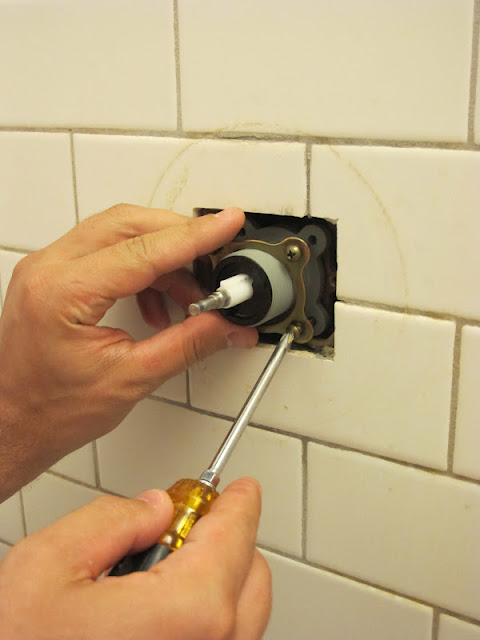 Last steps were to re-install the base plate and handle: 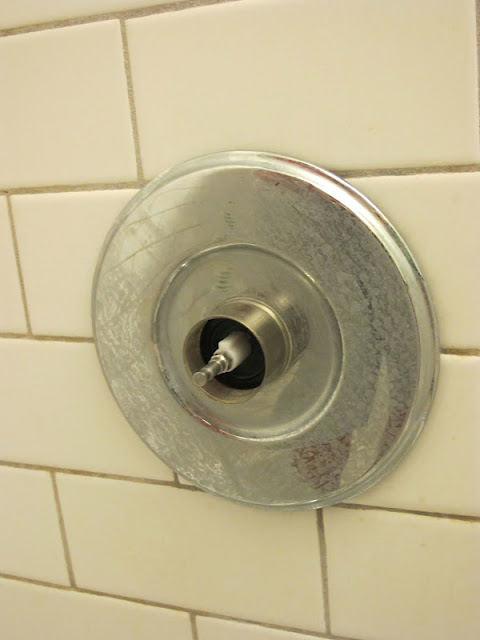 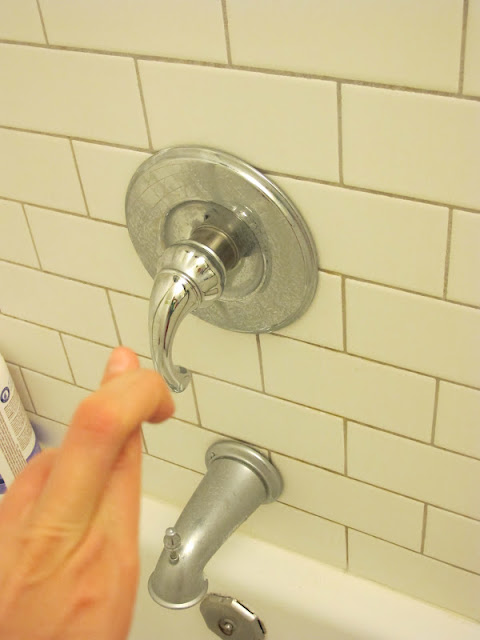 This time his plumbing project went far better than last time. Yet, I prefer the fun we had when he was screaming from the shower while being pummeled by a water stream 🙂 I think Braylen would have found it humorous as well! If we have another plumbing problem, or we have a total emergency, we’re going to use quite a nifty app to help us. It’s one our friend recently used and it’s called Emergenie. It actually puts you in touch with a nearby tradesperson, so in our case it would be a plumber. It sounds like a great idea, and means J won’t get soaked again, haha!