It makes me so happy that you guys love our butterfly of a dining room as much as we do- and it’s been fun sharing all the little details with you. Last things up – the table and chairs! Like 99% of things in our home, our stuff is either DIY, Craigslist, or eBay/auctions. If you have certain dining chairs and tables in mind, then you’ll want to whittle down your searches by adding in more keywords online so you can find exactly what you’re looking for and then go from there. 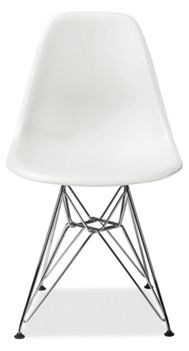 via
And then we realized to get the real deal, it would cost us a disgusting $3,500. Yes, to me that is qualified as disgusting. So on went our search. We found these chairs on eBay, and they are Krueger, and we initially paid $50 a chair. I say initially because when they arrived, they were decently damaged. The seller didn’t pack them properly, so some of the screws ended up scratching the seats {not all, but most of them}. We contacted the seller and sent him photos of the damage, and he was kind enough to bring it down to $30 a chair, so all in all we got 10 chairs for $300. Yes, in case you were wondering- that number is NOT disgusting to me, its actually something of beauty;) He also sent us a pen that is an exact match to the color, so we are just going to fill in the scratches and hope for the best! 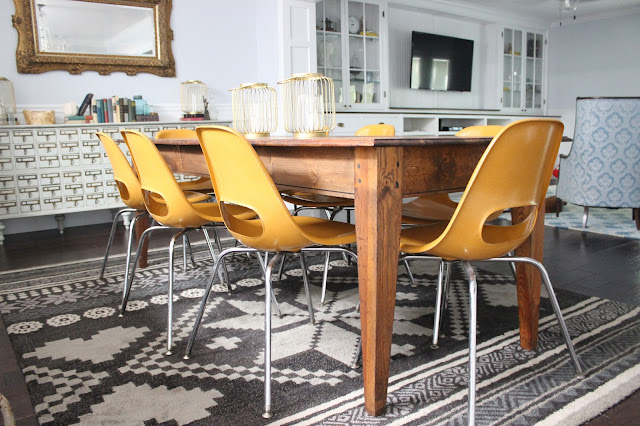 Thats the story behind the chairs. And even though they are fiberglass and look like they would be seriously uncomfortable, they are dreamy to sit in. Not lying!

Now for the table. Ooh the stupid stupid table. We have been around the world and back with going back and forth on decisions. For the longest time we were wanting a high gloss white table. Something similar to this one:

via
I was just determined to have a table like that one. That color, those legs, I wanted it all. And then reality struck and we realized not only was it going to end up costing us an arm and a leg to make the table, but that white would hold up about .25 seconds around kids. The top and structure of the table wasn’t the high price part, but finding legs {or having them made} like that were seeming to cost us a fortune. Im talking $500 to have them made. Again, a disgusting number for some legs.

Yes, we could have gone a different route for legs and had much more simple ones, but we felt that those were crucial to getting the look we loved for it. So we changed our search and were going to DIY one, since we already have before. Then we realized we have about 300 projects left to do here, and if we found the right one online, we should do it. We found this beauty on Craigslist, and it was $550. It is beautifully refinished with tons of character, and in the end only cost us about $200 more than we could have made it for. 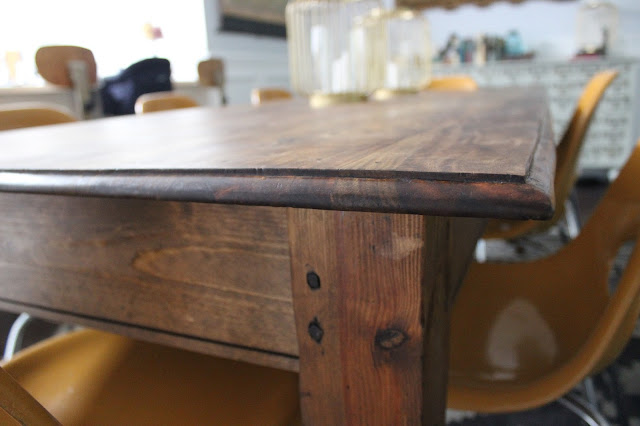 We are so happy with the choices we have made for this room. Not everything in it was DIY, but when you see something you just love, as in love as much as anything you could DIY, thats ok!
Now, I do need some advice here. The corners of the table are fairly pointy, not being too friendly to Bray so far. He is a freaking tough kid, so doesn’t even make a peep when he bangs in to them while running around, but its leaving marks and freaking me out! So, is there even such a thing as something to protect the corners that is either not hideous, or at least removable to take off when we have people over {without the kids being present!}??? Help a mama out!