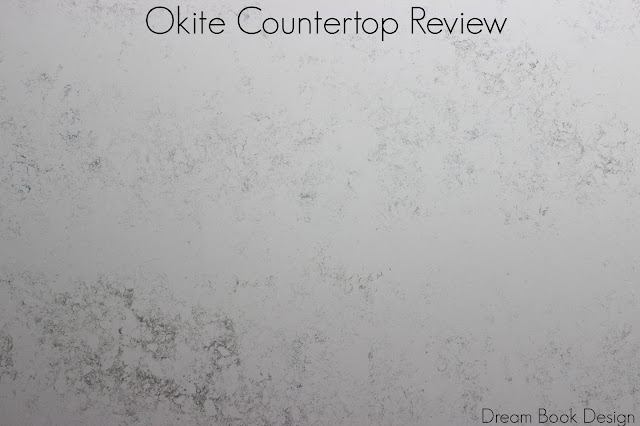 I should start by saying that we have no affiliation with Okite, they are simply the countertops we chose for the new house.

We have had these beauties for about four months now, so I thought it was about time to share the nitty gritty about them. {here was our first post about them, more details included on the actual makeup of the counter} After-all, they are a white counter… thats not marble…thats considerably cheaper than a lot of other options out there. So don’t you want to know if we are dancing with glee or crying in the corner over how they are holding up?! The counters are amazing. You see, when you live in a house with animals, a baby, and a woman who loves to cook- things get messy. I try to clean the kitchen {counters- not floors..lets be honest here} every night before heading to bed, but sometimes it doesn’t get done. I have left cut lemon wedges, rings of red wine, all the worst offenders. And guess what comes on with just water the next day? Everything!

I mainly just use soap and hot water to clean the counters, and they look sparkling. There has been only one scary time with the beauty of the white. I had brought a box of produce home from Costco, put away the perishable stuff, and had to run back to work, leaving the box with a few items left in it on the counter. When I came back four hours later and moved the box there was a huge blue ink marking on the counter. Apparently a stupid pineapple had been damaged and leaked its sticky juice through the box, making the boxes ink stain the counter. I went along with my normal soap and water, and it didn’t budge. At all. And then I panicked!

Luckily I checked the Okite site real quick and read that they encouraged Soft Scrub with bleach for tough to remove stains. Sure enough, a few scrubs and we were back in business!

The white looks like a true white, the grey ‘marbling’ rangers from light grey to almost charcoal  The coloring and marbling is really beautiful:

Overall, we are so happy we went with these. Another reason why we initially went with Okite is because, unlike most other options, you are able to purchase a half slab, which brings your cost down significantly.

If anyone is interested and has more questions, feel free to ask. Cheers to finding a great alternative to our beloved Carrara Marble.